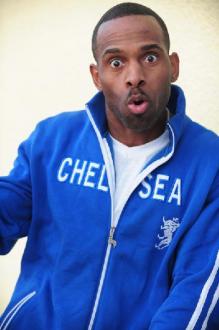 You Can Follow Me @ --
Ty, a Chicago native, got his start at Seattle’s “Comedy Underground”, since then, his star keeps rising!! Dedicated to “BRINGING THE FUNNY”, his shows have been called “hilarious” by Whoopi Goldberg, “thought provoking”, “edgy”, and have earned him countless T

V. appearances. As one of the 2, finalist on the most watched and Emmy nominated season of “LAST COMIC STANDING”, Ty has gone on to multiple “TONIGHT SHOW” appearances! Jay Leno says Ty is “one of the funniest comedians working”. Along with HBO’s “BAD BOYS OF COMEDY”, his own “COMEDY CENTRAL PRESENTS” and 1 hour Special “ISSUES”, Ty has been called “one to watch” by the Hollywood Reporter.  Ty has also been seen on the sitcoms “Samantha Who” and “Til Death”, as well as “Nick Mom night out” and “Tosh.O”.  With charm and style that transend race and age, Ty’s ability to rock ANY and ALL audiences has made him an international favorite on stages from the South Side of Chicago to theaters in London. You don’t “go to” a Ty Barnett show, you “hang-out” with Ty Barnett.