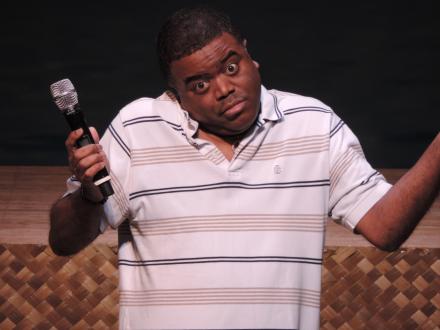 He was lost, didn’t know where to go in his career or his life. That night he asked himself, “What am I supposed to do?” That very same night he had a dream he was on stage performing in front of a sold out crowd. He knew he couldn’t sing, but he could make people laugh. A week later he signed up for an open mic, and a few months later won the Washington, DC, Comedy Competition. After two years of plugging away at it, Teddy felt it was time he set his sights on his next challenge: New York City, “The City That Never Sleeps”. Teddy learned fast that story was a falsehood. Whoever came up with that one obviously never rode the NYC subways at four in the morning, because people were sleeping all the time. Maybe they missed the meeting. Teddy Smith took his talents to the world famous Apollo Theatre and got a standing ovation. That lead to a big gig at the Tropicana Casino in Atlantic City opening for the Isley Brothers and Teddy Pendergrass. Then he traveled overseas to do a television show called the Comedy Factor and a month tour in Amsterdam and Rotterdam. Teddy has done the famous Aspen Comedy Festival were he was named among the “Comics to Look Out For in the Future”. Teddy tours all up and down the east coast, headlining the Paramount Theater in Huntington Long Island, Theater Three in Port Jefferson, The Smithtown Performing Art Theater. He appeared in the movie Umbrellas Kill, and has appeared on Live At Gotham, Comedy Central, Comic View, Showtime, Jay Leno’s Tonight Show Website, The Gordon Elliot Show with Jackie Mason. Teddy covers topics from divorce, family, kids, race and social issues. Teddy Smith currently lives in New York City.