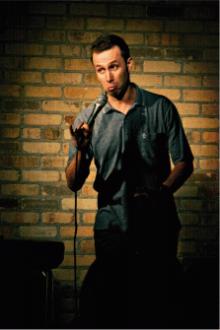 You Can Follow Me @ --
Nate Fridson (Opens for Sklar Brothers, Survived Detroit): “Nate Fridson is a fast rising star out of the rich comedy scene of Detroit

Featuring well-crafted jokes and an inviting, accessible style, Nate’s act has been called ‘smart,’ ‘original,’ and, ‘better than it used to be’ by both peers and audiences alike. A caustic writer who ‘brings sarcasm to an art form,’ Nate shies from no subject— his material grows from deep, probing roots in the autobiographical to reveal a skewed, surreal worldview. Nate has performed at the Laughing Skull Comedy Festival in Atlanta, was a semi-finalist at the New York Comedy Contest, and recently traveled to Japan to perform for the US Troops stationed on Okinawa.”