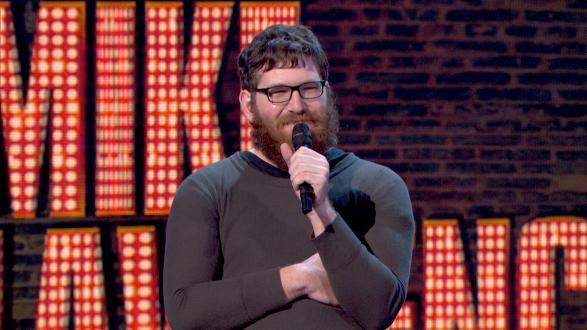 He is a staff writer on the upcoming season of Inside Amy Schumer and was a writer on the 2015 MTV Movie Awards, the 2015 Webby Awards, and We Have Issues on E!   Mike is a recurring guest on the Comedy Central TV show @midnight and his stand up has been featured on NBC’s Late Night with Seth Meyers, TBS’ Conan, FX’s Totally Biased, and John Oliver’s New York Stand-Up Show on Comedy Central. In 2013 His half hour special for Comedy Central aired in conjunction with the release of his album “Sadamantium”, produced by Comedy Central Records.   Additionally, Mike co-hosts the podcast Nerd of Mouth on Cave Comedy Radio and has appeared on countless others such as WTF with Marc Maron, Robert Kelly’s You Know What Dude, You Made It Weird with Pete Holmes, Who Charted, The Dana Gould Hour, The Adam Corolla Show, and The Artie Lange Show.